What changed in the New Suspended Ceiling Standard?

At the end of last month, a new Standard ‘Suspended Ceilings – Design and Installation’ was released. AS/NZS2785:2020 has an impact on the industry from the way ceilings are designed and tested, through to how they are installed and lastly, how they should be maintained.

To help you understand the changes, we’ve gone through the new Standard and provided a summary of the changes below. However, as this blog is just a short review, you should still download and read through a full copy of the new Standard.

OVERVIEW OF THE CHANGES

Nearly everything in the new code has changed, and it certainly was overdue for an update, with the current standard being published way back in 2000. However, one of the primary drivers for the new code was to bring the document into alignment with the AS1170 series loading codes, which all had undergone significant revisions during the same period. This alignment includes not only terminology, definitions and notations but also load combinations as per AS/NZS1170.0.

Some of the first things you’ll notice is that the standard has increased from 47 pages to 87 pages, it has a greater focus on earthquakes and life safety-critical applications and all the Sections have been shifted around. These are some of the obvious changes but, there have been a lot of smaller more subtle changes that need to be considered as well.

As an example, you will see the word ‘action’ has replaced ‘load’ which is the definition provided in AS/NZS1170.0.

The following is a summary of what we believe to be the more important changes. 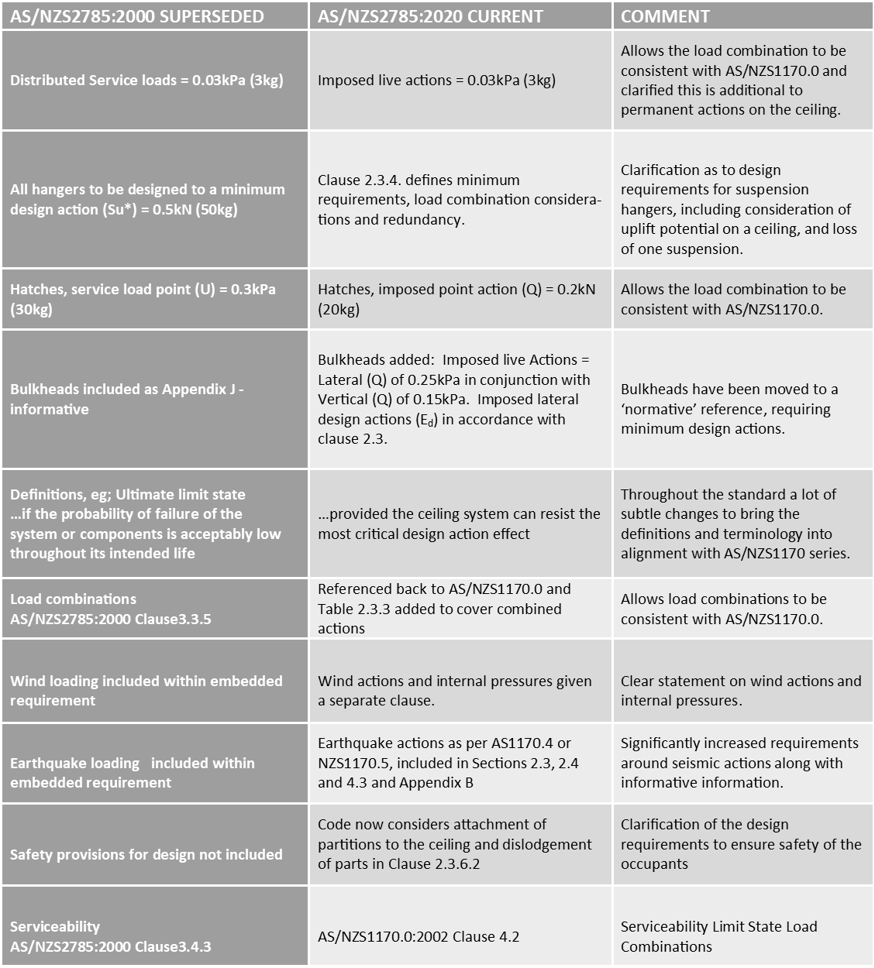 The following table has been added into the new Standard and defines the appropriate ductility factors to be used for member and connection design for both Australia and New Zealand.

Inter-storey drift has been expanded and clarified for both Australia and New Zealand, incorporating Ultimate (ULS) and Serviceability (SLS) Limit State requirements. In Australia, serviceability is deemed to comply when the ceiling is designed in accordance with AS1170.4 for Importance Level 2 (IL2) and 3 (IL3) buildings. This may not necessarily be true in all cases as the ceiling may fail due to impact with the structure at an SLS condition due to inadequate allowance for differential movement between the structure and the ceiling. More importantly, it is unlikely that these buildings would have a movement report available for the ceiling designer.

For the ULS condition, the ceiling code adopts the maximum drift allowance from the respective seismic codes for Australia and New Zealand, unless a specific alternative value is provided.

New Zealand have considered SLS for ceiling systems for some time, and it was appropriate for Australia to provide clarity in this area as well. Table 2.4.3 was included to define the minimum SLS drift requirements, with an overall limit not less than 0.4 times that of ultimate.

It was also considered reasonable to clarify that some damage can be expected at the SLS simply due to the complexity of the load paths through the ceiling grid and abutting structure under seismic actions.

In addition to the above ‘normative’ references in the code, Appendix B has been expanded to provide commentary around the drift requirements and differential movement between the ceiling and the structure.

DEFLECTION LIMITS TABLE GETS A MAKEOVER

PRE-CONSTRUCTION GUIDELINES ARE PROVIDED FOR CONTRACTORS

The new Standard details what should be included in tender documents to allow quotation of proposed works including any required engineering design. This includes basic design criteria through to more complex seismic and wind design, performance and actions, as well as interaction of ceiling systems with services.

Construction processes have also been added in including coordinating with services for the install, how the ceiling should not be installed until wet works have been completed, not starting construction until all documentation is completed and checking the site against the documentation before starting (using a checklist).

NEW FASTENER STANDARDS GET A MENTION

AS5216:2018 and NZS 3101 have been included in AS2785.  It reflects the use of fasteners in life safety-critical applications and the tests that the fasteners are required to pass when installed in cracked concrete.

SHOULD PARTITIONS BE ATTACHED OR NOT ATTACHED TO CEILINGS? 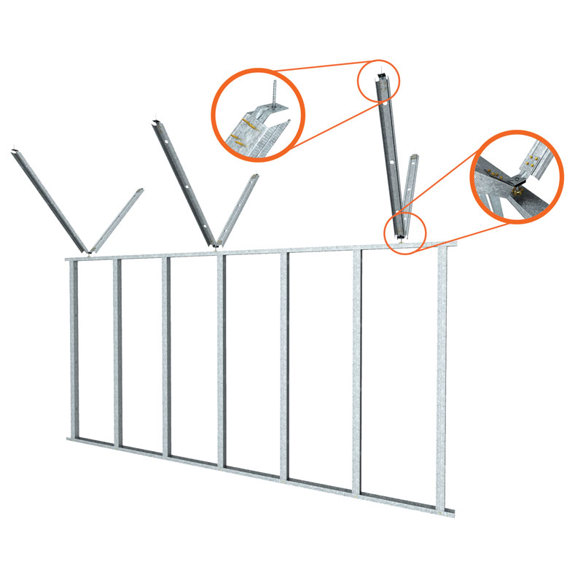 A whole new section and what a great addition.  NZS4219 resulted from site observations post-seismic events in New Zealand and was the first time really that ceiling damage was related back to interaction with services in the ceiling plenum. Section 4 Detailing, Ceiling Restraint and Services interaction provides solutions and commentary to many situations where ceilings and services interact.

To ensure Contractors are provided with high-quality materials to use in their suspended ceiling installations, the new Standard includes additional information on the requirements for testing by manufacturers and suppliers in the industry. Some American Standards have been referenced for test method purposes, where there was no Australian Standard available, however determination of design capacities needs to be done in accordance with the relevant Australian Standard for the material tested.

This includes testing for both strength and serviceability which need to be backed by test reports that state everything from the test laboratory name through to the mode of failure. It’s a win for Contractors to know the products they’re purchasing are held to this Standard.

If you’ve made it here, you’ve done well, but there is so much more to know about the new Standard and we recommend you download it.

Overall it is trying to increase the minimum requirements of ceilings to meet the relevant design codes and standards already in place.  It is good for the industry to have and clears up some of the grey areas that have been around due to other codes changing and needing this one to be brought into line.