For the first two projects, the team at Featuroom were asked to direct their creative attention to the main room which was also to include kitchen, dining and lounge, with additional space for an entertainment area which included room for a large TV.

They were initially asked to provide the builders with details for a feature wall for the TV and also a bulkhead above the kitchen island bench. After producing the 3D concept for the feature wall, which included 100mm niches, the concept was well-received and the team were given the opportunity to execute the fit-out for the project.

Featuroom framed the entire ceiling of the house using 28mm Rondo KEY-LOCK® Furring Channel on 226 clips. This gave them the substrate to suspend two layers of 64mm Rondo Stud and Track to create the feature walls and niches. 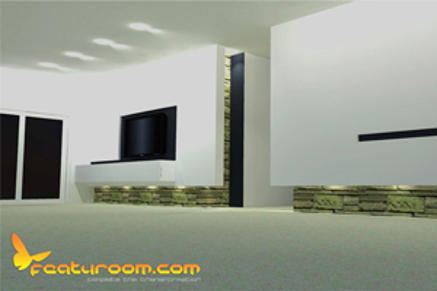 To complete the area, they used fibre cement panels to suit the textured tiles behind the feature wall followed by sheeting the room using KNAUF “MASTA DECO” high level four finish plasterboard, at which point they proceeded to install Rondo EXANGLE® external render and capping beads.

Following this, Featuroom created the bulkhead using the same 100mm detail as seen in the feature wall. They utilised Rondo 64mm Stud and Track to produce the frame and sheeted the whole thing using KNAUF “MASTA DECO” products once again. Once complete, the cabinetry was installed; the tiles, LED lights fitted and the niche details were painted.

Overall, the customer was happy that the builder was able to produce a one-off unique job. Moving forward, Featuroom are currently working on a project in Cornubia, QLD where they have been asked to provide a few solutions on the project which mainly include utilising Rondo 28mm KEY-LOCK® Furring Channel and more lightweight Rondo 64mm Stud framing. Whilst this project is not quite complete, Featuroom will be showcasing their works at this year’s 2012 AWCI conference, but additional projects can be viewed at www.featuroom.com.au.