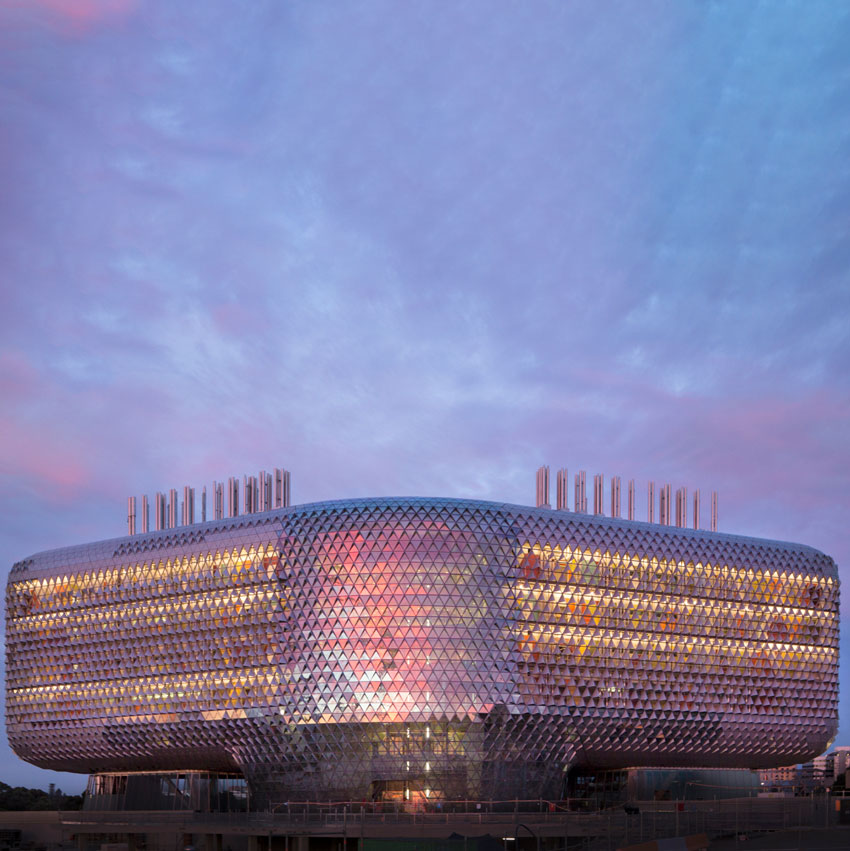 The visually stunning building required assistance from Rondo’s Technical Services team in the design of external service walk ways of which, are subject to external wind loads. Additionally, Rondo’s team provided seismic designs for Rondo’s DUO® Exposed Grid Ceiling System which you can see in the gallery below.

Ceiling and Wall Contractors in South Australia explained that they used Rondo’s Wall Design Wizards on our website to ensure several full height walls were achievable as specified and in some cases; the wall height had to be adjusted to match what was calculated on the Rondo Wall Wizard.

The interior of SAHMRI features a large curved steel stair case of which, the spiral sides were formed with Rondo’s 76mm Stud and Track as vertical support and with Flexible Track capping the Stud to create the spiral curve effect. The plasterboard lining the sides of the staircase is supported by Recessed Furring Channel which is curved around the stud work horizontally.

The curved bulkheads on each level of the building which provide an architectural feature are formed by using Rondo 76mm Stud and Track. The curve was set out with Rondo Flexible Track from which stud droppers were installed and finished at the bottom with similar Flexible Track. The framing braced back to the structure with 76mm stud supports. This provided the framework to which the plasterboard was installed to form the curved bulkheads.

The $3 billon, 25,000m2 purpose-built structure aesthetic ‘dia-grid’ façade adapts to its environment, becoming a living organism that responds to the position of the sun. Inspired by the look of a pine-cone, the SAHMRI is on track to receive a LEED GOLD rating due to its sustainable features.

The first stage of the largest health and bio-medical precinct in the southern hemisphere was officially opened by Prime Minister, Tony Abbott in late November. The facility will house a team of more than 600 leading researchers with state of the art facilities in the search of enhanced treatments and cures for some of the world’s leading health issues.